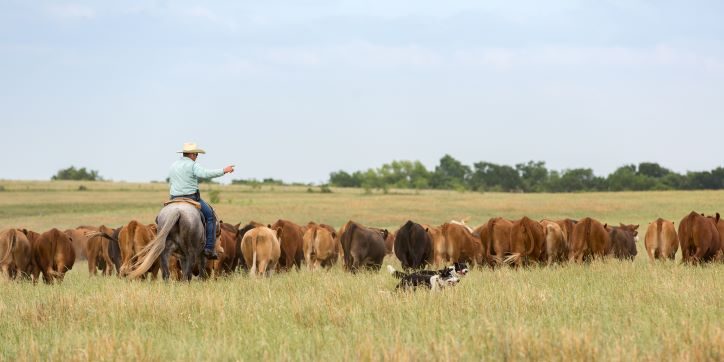 What can be more peaceful than the sight of cattle grazing on a grassy hillside? They seem so content, so relaxed, and seemingly oblivious to anything except the grass they’re eating. However, there’s more to these group dynamics than meets the eye 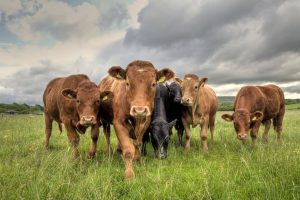 ! There’s a definite social hierarchy within the herd that’s missed by the typical onlooker. Cattle display a complex system of group behavior that’s recently caught the eye of scientists who study these types of complex social systems.  Yes it’s true,  people called Complex Systems Scientists are looking into cattle herd mentality and finding it especially interesting! Here at Drinking Post, we’re interested in your herd’s behavior as it relates to automatic waterers.

Herd behavior describes how single animals behave as a part of a collective unit. Many “prey” animals have learned to eat and travel in large groups for protection.  Simply put – there’s strength in numbers! Each individual is less obvious, and therefore, less likely to be singled out by predators.  All those extra sets of eyes watching their surroundings allows others in the group to graze more safely. Stress levels, both in the herd and among individual animals, significantly reduces when cattle are together in a group. They appear much calmer and more relaxed when they have companions and feel safe.

Most cattle herds have a determined leader that every other cow will follow. Anyone who has worked with herd animals like cattle, horses, sheep, even alpacas, knows there’s a group leader which the others will follow. Trying to force the entire group to move forward from the back of the herd will prove futile in most cases. It’s much easier to entice the leader to move forward (sometimes with a bucket of grain) and have the others follow. 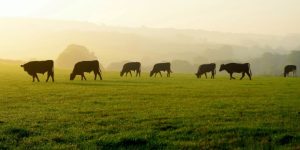 Cattle are more confident and feel much safer following their established leader. 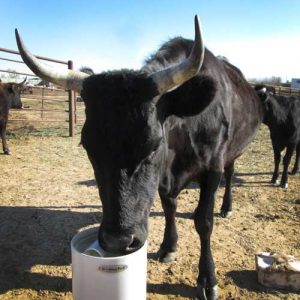 Grazing animals will also tend to clump together inside the herd within several separate groups who have similar eating styles.  Fast grazers make up one group and slow grazers tend to gather in another cluster. Cattle may not necessarily stay with the same group all day long but will often move between groups to fit their individual grazing needs.

Use Herd Mentality to Train on the Drinking Post

The Drinking Post can be a great solution for your cattle watering needs. The Drinking Post provides fresh, clean water at the perfect drinking temperature year round which can greatly increase water consumption in your herd. When your cattle drink more water, they eat more and have better weight gain, so it’s an attractive watering solution for many cattle owners. However, the Drinking Post requires some training since the animals need to push the paddle to activate the water. If you have a lot of cattle, this might seem like a daunting task! In fact, that’s one of our most common questions when it comes to using the Drinking Post for small to medium sized cattle herds – “do I have to teach every single cow to use the Drinking Post?!” – thankfully, the answer is no! That would be a lot of work! The cattle’s herd mentality comes in handy here. All you need to do is train the group leader and a few other cows. Once that small group learns the Drinking Post and starts to use it, the rest of the herd will be quick to follow! This way, you can use the interesting group behavior of herd mentality to your benefit! Similarly, you have a cow/calf operation, you will train some of the cows and the calves will learn quickly from their mother. This makes training much easier and more manageable for you. Make sure to follow the rest of the training guidelines as well, like removing all other water sources from the area and clipping the training attachment to the paddle. Click here for our full Training Guide: