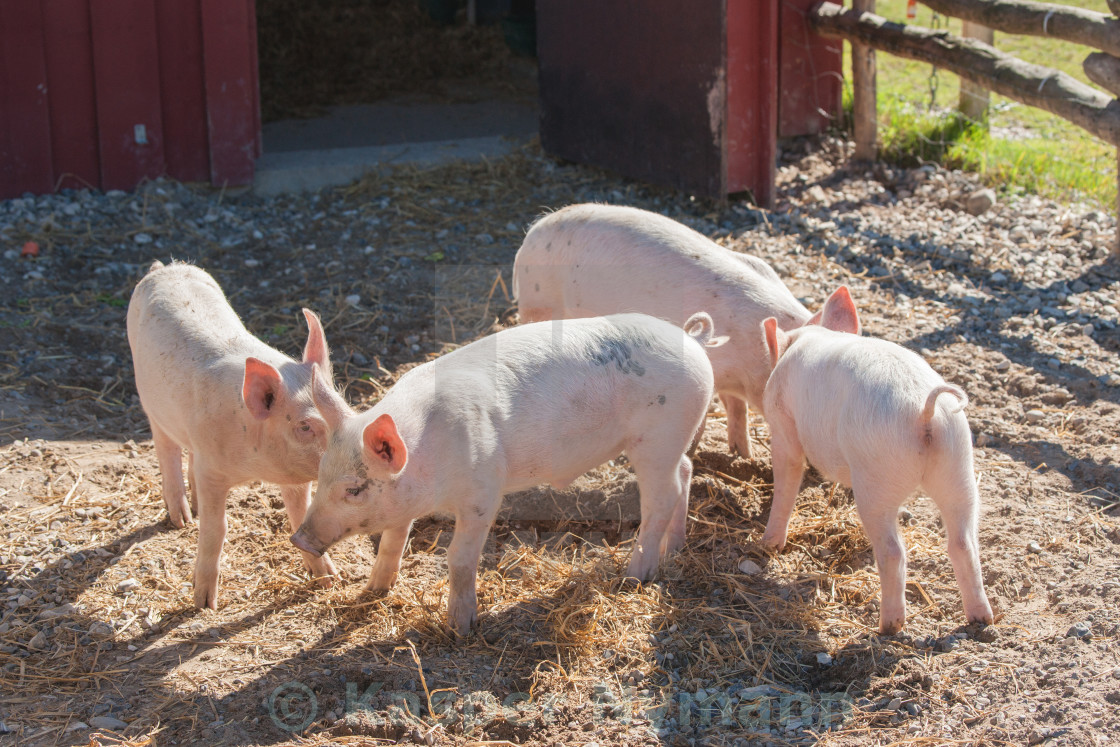 One thing that all pig owners know is that pigs can be stinky. No one likes a smelly pigsty – not you and definitely not your neighbors! The bad news is you will never completely eliminate the smell of your piggies… the good news is you absolutely can mitigate it! Today I’m going to lay out a few simple ways to reduce the odors in your pig pen. All of these tricks are simple and will not only reduce the smell of your pigs, but they will also make them healthier and happier! (I’m willing to bet you’ll be happier, too!) 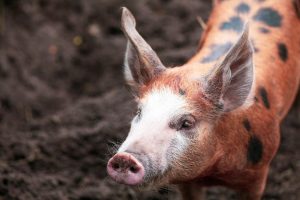 One easy way to mitigate odors is to keep your pigsty dry. We all know that bact 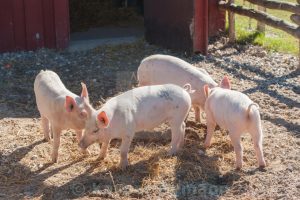 eria and viruses like to live in wet and warm conditions – this is the perfect breeding grounds for odors, too! One of the main reasons that pigsties get wet is because the pigs knock over their water trough. This is an extremely common occurrence and will cause your pigsty to stink up really badly! To solve this issue you need to get your pigs a water source they cannot knock over. A Drinking Post automatic pig waterer would be a perfect solution for this. Since the Drinking Post is installed 18” below the frost-line it would be impossible for a pig to knock it over (unless you have the hulk-equivalent of pigs in your drove).

Pigs have a natural tendency to stay clean – I know, it’s hard to believe! We use pigs as the standard for dirty and gross behavior – “he’s a pig”, “you smell like a pig”, “your room looks like a pigsty!”… but pigs are actually just getting a bad rap! Pigs are very smart and they will stay clean if given the proper environment. The best way to promote “clean” behavior in your pigs is to keep all their areas separate. Keep their food and water in one area, their bedding straw in another, and keep their bathroom area away from it all. You will also need to have a separate wallowing area, but we will talk about wallowing later on. Pigs are smart enough to keep their bathroom business confined to their bathroom area! This will greatly reduce odor because it will be much easier to clean up if the manure is all in one place instead of strewn about the entire ‘sty. Also, the pigs will have cleaner bedding and feeding/watering areas because they won’t be sleeping, eating, and drinking in their own mess. This simple reorganization of your pigsty will reduce odors. Plus, the pigs will get to be their natural, clean(ish) selves! 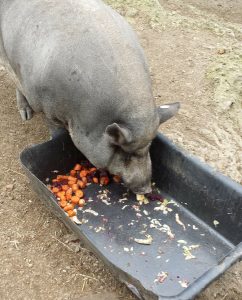 If you want to reduce the odors, you can start by looking at what’s going “in” your pigs – i.e. their food and water. By paying closer attention to their feed and water, and by making some slight adjustments to what’s going “in”, what comes “out” will be less smelly. First let’s talk about food… studies have shown that you can make adjustments to their food that will reduce odors by up to 20%! That’s a lot less wrinkling your nose and saying “ew” when you’re near your piggies. To get this odor relief, you can start phase feeding your pigs. This just means that you want to be paying close attention to the nutritional needs of your pigs based on what developmental stage they are in. Then you will give specific rations appropriate for their stage – stages can include growth, pregnancy, lactation, or maintenance. For example, you want to be giving the exact amount of crude protein for their stage. This will reduce excess nitrogen and ammonia production which will reduce odor! And we all know how terrible ammonia smells – gross!

Now, let’s talk about water… I’ll let you in on a secret – healthy pigs stink less! Yep! Who would’ve thunk it? One of the best ways to promote health in your pigs is by monitoring their water intake and by making sure they have access to fresh water all the time. You want to pay special attention to water quality if you are concerned about odor. Water troughs and traditional drinkers can contain bacteria and a variety of other microorganisms which affect pig health and odor. To ensure water quality you can install an automatic pig waterer, like a Drinking Post, so they can have fresh, good quality water all the time. This will reduce the smell of what comes “out” and keep them healthy because water plays a huge part in proper digestions in pigs. The amount of water intake is equally as important as water quality. You want to make sure they get all the water they need! A lot of times with drinkers, the nipples become clogged and you won’t find out until you go around to manually check them all for proper functioning. If a nipple becomes clogged, your pigs won’t be getting enough water. The Drinking Post automatic pig waterer is a good alternative, you can watch the pig fill the bowl so you can visually see them getting their water. This will ensure they are getting plenty of high quality water which will make for healthy pigs who smell less! A win-win for everyone!

Finally, we are going to discuss the importance of wallows. If you know about pig behavior, you know that wallows are absolutely necessary! If a pig does not have a wallow, they will create their own. This means they will knock over their trough if they have one, spilling their water source and rolling around in it until their heart’s content. Then, they will inevitably get thirsty and since they 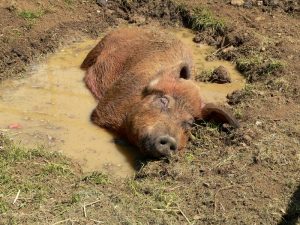 no longer have their trough, they will drink from their newly made wallow… sounds sanitary – not! This is definitely not a

fresh, clean water source! But, since we are talking about odors, the major issue with this is it will get the pigsty all wet which increases odors. As I mentioned before, keeping your pigsty dry is very important for odor control. Now if your pigs don’t have a trough to knock over, the alternative is way more disgusting… Are you ready for this?… They will resort to rolling around in their own urine and feces – yuck! I don’t think I need to explain to you how this will increase odors. So, as you can see, it is very important to provide a proper wallow for your pigs that is separate from the other areas in their pigsty. If they have a wallow, they won’t go making a mess of things trying to create one themselves! It is also important to make sure they have a water source they cannot tip over (unlike a trough). Like I mentioned earlier, the Drinking Post pig waterer is perfect for this since it is installed so deep in the ground. That way, they can get their fresh, clean water from their Drinking Post and then they can go to another area of their pen to wallow, without mixing the two activities together. Sounds like a pretty good solution, if you ask me!

There are many ways to mitigate odors in your pigsty. I’m confident that if you implement some, or all, of these techniques that you (and your neighbors) will be breathing easier. Plus your piggies will be happier & healthier as well! For more information on getting a Drinking Post for your pigs, you can visit the Pig Waterer page on our website. Your pigs will thank you for getting them a Drinking Post (and your nose will thank you as well!).  Also, don’t forget to read our blog “Watering Pigs in the Summer Heat“! Make sure to keep an eye on our social media and our website for more upcoming blogs about pigs! 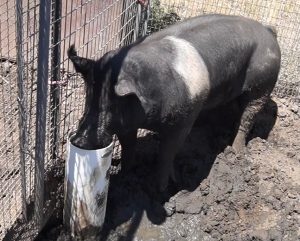